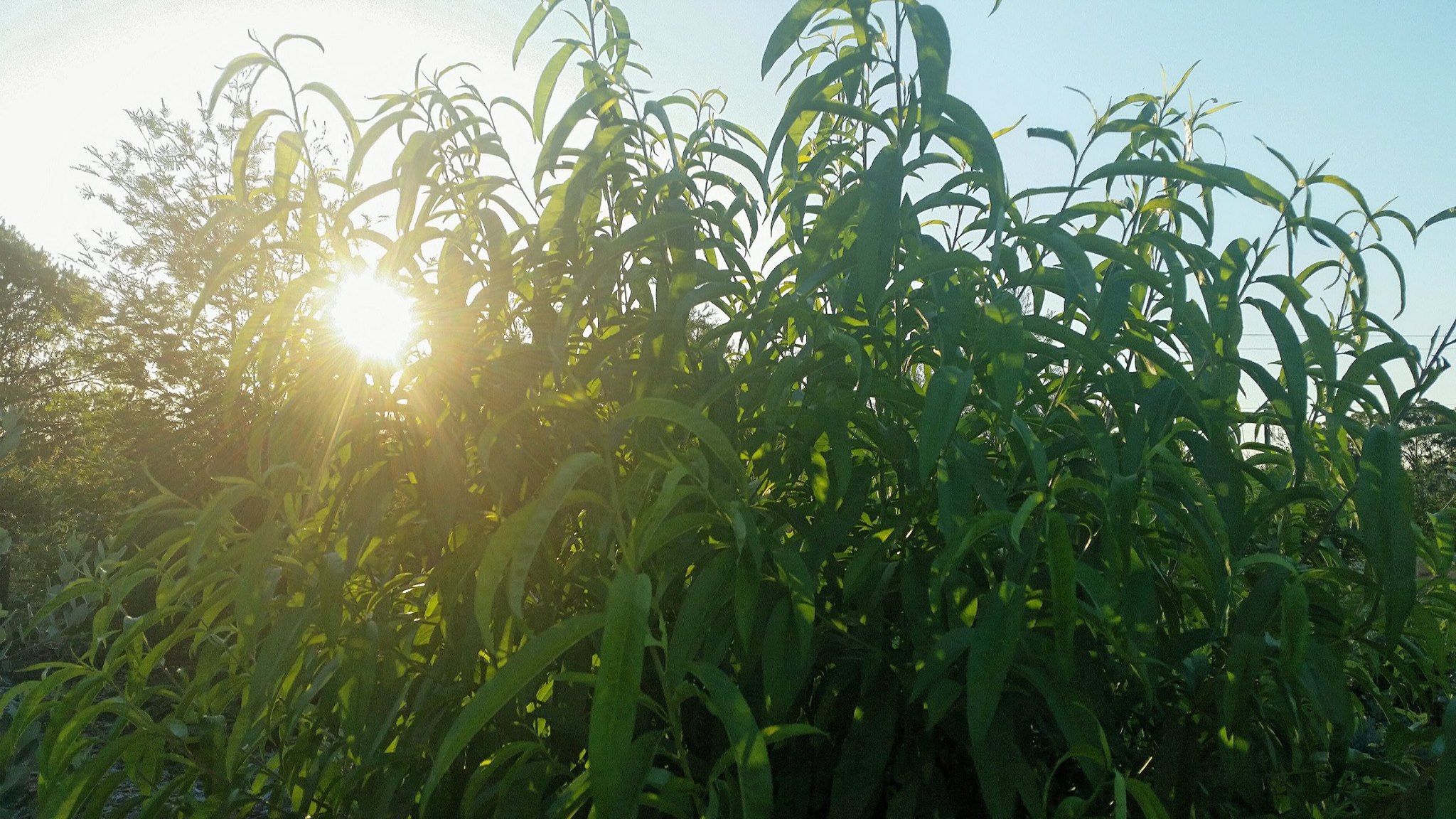 On the weekend a group of PDC students viewed my property as part of their course. It was wonderful being able to share all of the things that I have learnt while designing and developing my gardens. With this post I hope to also give you some ideas that you may not have thought of which could work well in your own gardens at home.

I want to eventually have 1 acre of food forest gardens. We are on tank water and it isn’t possible for me to irrigate such a large area, so I had to find other ways. I have put (or am putting) the following systems in place:
• Added an extra rain water tank to increase our holding capacity
• Cleaned out and relined the old leaky dam
• Dug swales throughout the food forest area
• Dug fish scale swales beside each individual fruit tree
• Planted a hedge of the local black wattle as a windbreak to reduce evaporation
• Shaded the western side with fast growing black wattles
• Put header tank at the highest point on the property to pump dam water to this tank and gravity feed to the gardens
• Dig swales so that the runoff from the southern side of the property (which is currently being lost downhill) feeds into the dam
• A greywater reed bed
• A composting toilet
• Mulch to the food forest area which is gradually being replaced with ground covers

What I have found to be extremely important in my system is that I did NOT water my fruit trees – this includes my citrus of which I have 2 lemons, a lime, a lemonade, an orange and a mandarin. Except for watering them in at the time of planting they would be lucky if they have received water once or twice in the 3 years since I planted them. What I have found is that the roots of my fruit trees have been forced to dive deep and strong in search of water which would otherwise be sitting just below the surface if I had artificially irrigated. To test my theory, I put my chicken pen around my orange and lemonade trees. Citrus roots are notoriously shallow, however, the chickens scratched the mound of soil away and I could see that the exposed roots were heading straight down. My citrus trees were unperturbed by the incessant scratching of my chickens.

I also let my fruit trees tell me when it is time for them to produce a crop. I have found that their first few growing seasons I will see very little growth and the tree will appear to be doing nothing much at all. I am not concerned by this because I know that this means it is putting its effort into root growth instead. Suddenly, there will be a season where the tree will burst into life. Growth will be vigorous and the trunk of the tree may suddenly thicken up. At this point I know my tree is ready and I will let it produce fruit – but not before!

I use the weather to my advantage. I will watch the weather forecast and when I see that we are due to get some solid rain I will go outside and toss heaps of seeds around. I generally harvest my own seed so that I have plenty and can afford to “broadcast sow” and just leave them to their own devices. It is impossible to “baby” 1 acre of seedlings and I certainly don’t have the time to sow in pots and transplant 100’s of seedlings into the garden. On a side-note, plants that have been direct sown are generally stronger plants than those which have been transplanted after being started in pots.

The PDC students had previously been to visit a small back yard permaculture garden so I explained how it is impossible to micro-manage a large property in the same way that you can on a suburban plot. Because of this I learnt to love my weeds and welcome my pests (most of the time). I look for the good in them and use this to my advantage where possible.

My weeds are performing jobs in the garden which I would work many hours to do myself. To the PDC students I pointed out some blackberry nightshade growing in my patch. When I first noticed this common weed I knew that until it started to produce mature seeds it was not a threat so I waited and I watched. To my surprise I found that the plant became a “trap crop” for the 28 spotted ladybeetle! The blackberry nightshade became full of these pests – which then left my pepino, tomatoes, potatoes, capsicum and eggplant alone! And with the 28 spotted ladybeetles being all together on the one plant it becomes easy for predators to pick them off. They never did move across to my other plants even though they were growing right next to each other. As soon as the berries on the blackberry nightshade started to mature, I cut the plants out at the base, leaving the roots intact to either die back and nourish my soil or for the plant to regrow and begin the cycle again – so I get all the advantages but without it seeding throughout my garden. Scientific studies have also shown that plants in distress excrete a pheromone which warns other plants in the area of the attack. Neighbouring plants will then respond by activating bug-repelling chemicals to protect themselves. So perhaps my attacked blackberry nightshade was actually strengthening the other plants around it. Not only was this plant a trap crop, but it also provided much needed shade and protection to some lettuces that were crowing at its base.

Any other weeds in my garden I try to identify the good they are doing before I take action. If they are providing benefits (trap crop, breaking up compact soil, ground cover, nitrogen fixing, dynamic accumulator) then I will leave them until they are just about to seed and then use them as “chop and drop” soil builders. The roots stay in place so I can keep using the weed in this manner.

I cannot bear to see my chickens and ducks locked in the coop and so I let them free range all through my food forest and vegetable gardens. My theory is that if I am not getting enough of some herb or vegetable to feed both my family AND my chickens and ducks then the balance is not right in my food forest ecosystem and I need to plant more! I am still getting this balance right.

I have two separate food forest areas. I did this in order to break the fruit fly breeding season down the middle. So fruit trees which fruit early in the fruit fly season are planted in one food forest while the later fruiting trees go in the other. In this way I hope that if I do happen to get fruit fly then they will be contained within one food forest and the cycle will be broken rather than progressively passed on through all of my trees. Free ranging my chickens and ducks through the property will also help control fruit fly infestation.

I currently have (I estimate) about 40 fruit trees. If I was an avid pruner I would be spending too much time in my garden working and not enough just enjoying it. So I do not prune unless absolutely necessary. I will take out crossing branches and if I had disease or pest infestation I would prune that out (although I haven’t had to yet), and I have some fruit trees that I am keeping narrow to fit in a tight space along the driveway. If I do cut branches from my fruit trees I will take the off-cut and shove it into the ground beside the fruit tree. I don’t do anything further to them. If they die I am not concerned – but I am finding that several of these branches have taken root and I have given myself a new fruit tree with no effort what-so-ever. I will dig these out once they are a little stronger and plant them where I want them.

If I have a fruit tree which fruits on the new growth at the ends of the branches and I am concerned the fruit will become too hard to reach then I will practice “branch bending”. The growth hormone (auxin) always flows to the highest point on a limb – which is usually the tip of the branch. If, however, you bend this branch so that the tip is below the height of the rest of the branch then the auxin will flow to the new highest point and cause growth (and therefore fruiting) from this more accessible location. Branches are weighed down for one growing season after which the limb “sets” into this position and the weights can be removed.

I hope this post has given you a few ideas to try in your own garden.

Planting Multiple Trees in one Hole