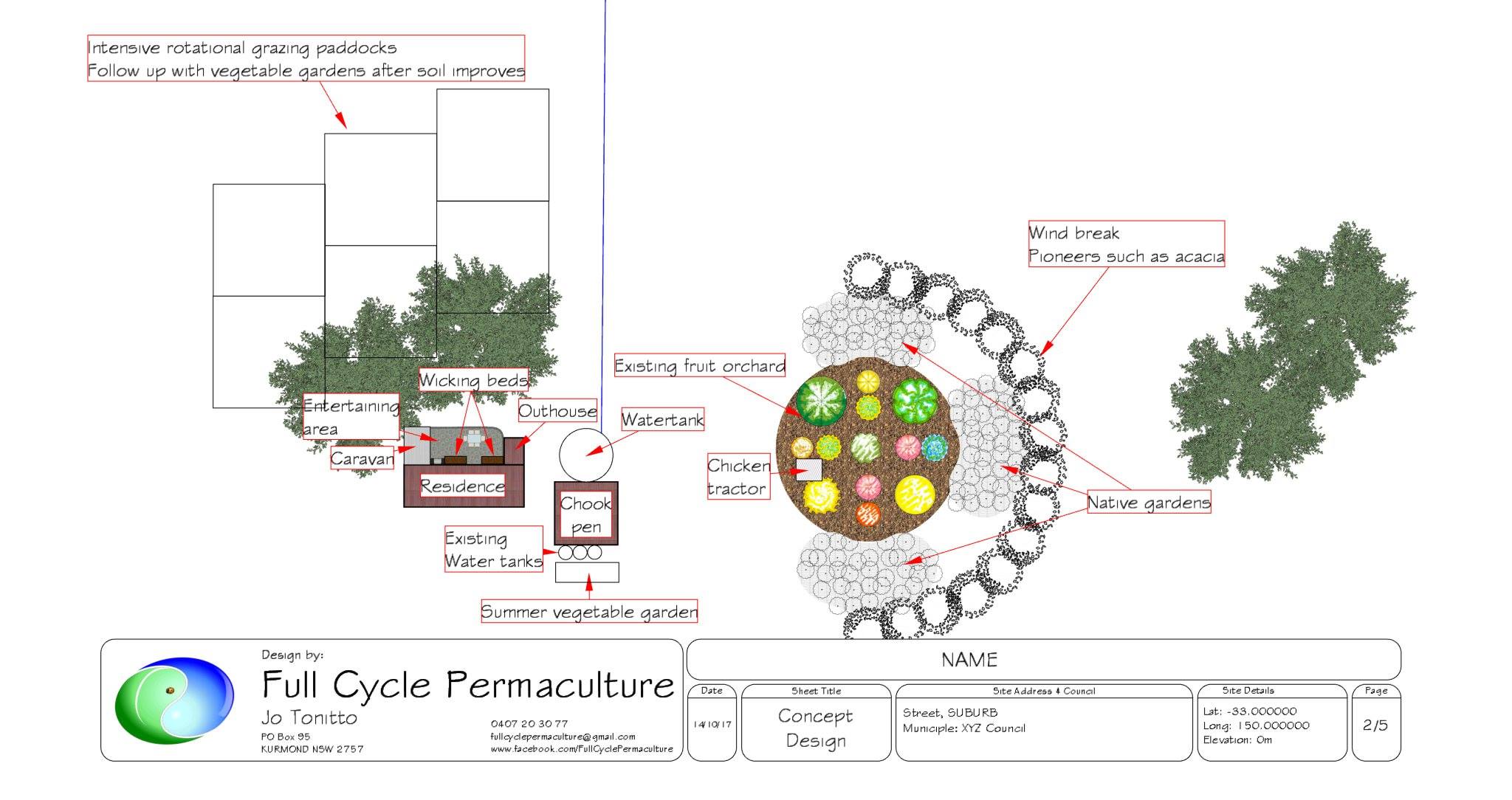 Our October Permablitz was on a 32 acre property at Cootamundra so a weekend camping trip was the go. The facilities were extremely basic with no electricity, very little water on site, and rather crude toilet arrangements. Some of us pitched a tent and some scored a bed in an old caravan – but regardless of where we slept we were all woken at 3:46am by the five roosters!

The client brief was to suggest ways to increase the value of the property and also suggest possible improvements for the fruit orchard and systems that he had already put in place. And of course I could not help but add a few ideas of my own that I felt would create a more productive space.

The challenges we faced were an extremely low annual rainfall of 348mm PA, no power (and therefore no way to pump water from the dam to the thirsty plants), minimal onsite water storage capacity, howling winds, extremely poor soil, owners that were only there a few days a fortnight, and one very cranky rooster!

A small fruit orchard had already been planted several meters from the living quarters (which was a converted shipping container). Although the location of this orchard was far from ideal due to the extremely windy location, the poor soil on the top of the ridge, and the lack of water, we never-the-less needed to work with what we had and try to save the suffering fruit trees.

Design suggestions included:
🐞Fast growing pioneer species (in particular wattles) to be planted to the north of the orchard but far enough away to not shade the fruit trees in winter. This was to create a wind break, bring in native wildlife, and also to fix nitrogen into the soil and to be used for “chop and drop” soil improvement techniques.
🐞A native garden to be planted close to the orchard to bring in beneficial insects and predators as well as native wildlife to assist with pest control and pollination.
🐞Planting of a crop that will produce a small income on the land further down the northern slope where the soil was receiving more water run off and the topsoil was in better condition. Crops that produced essential oils (perhaps lavender or tea tree) were a good possibility. Also deep ripping on contour of this planting area to improve water penetration into the soil.
🐞Move a chicken tractor around in the fruit orchard as the area had become overgrown with grasses that were sucking the life and moisture out of the soil which was already in poor condition. Straw mulch to be laid after the chickens have been moved through.
🐞Set up deep watering systems beside each fruit tree (eg. buried ollas or deep pipe irrigation).
🐞Use intensive rotational grazing with larger livestock to improve the impoverished soil to the north of the house and create a fertile growing area.
🐞Install wicking beds beside the living quarters for planting herbs and a few vegetables.
🐞Use the fertile ground down slope of the chicken coop to grow summer vegetables (unsuitable for winter vegetables as this is to the southern side of the coop and receives shade in winter).
🐞Install a windmill operated water lifting device to bring water up from the dam to the top of the hill.

From here a rough concept plan can be drawn up before final design work commences. Although this design would not be considered a “permaculture garden” by purists, we had to work within the boundary of what the client wanted.