Anyone who owns chickens (or any other poultry) is all too familiar with the cunning and relentless persistence of the local foxes. Perhaps at first you were complacent (“It won’t happen to me”) but let me assure you that a fox WILL eventually find your chickens. And when they do you will be added to their regular nightly route. They will visit your coop during their rounds and take advantage of any mistake – a little too late locking the gate? A hen escaped or accidentally got shut out? Didn’t notice where a fox has started digging under the fence? You won’t get any second chances if a fox picks up on your mistake before you discover it! 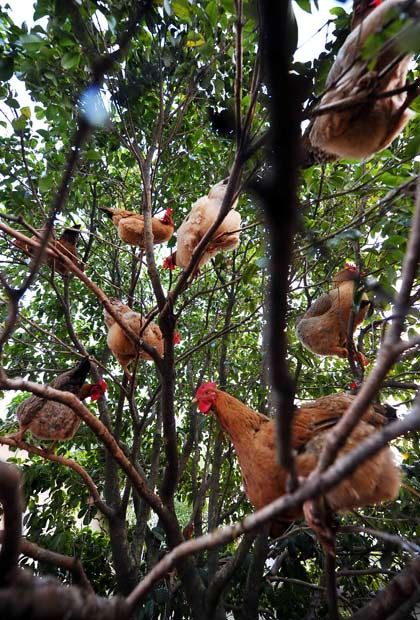 Our chicken’s ancestors used to roost high in trees and they could move to a new location if they came under threat. Today we have domesticated the chicken to an extent that we have made them a perfect target for the fox. We have bred them larger to get more meat (so they are slow and flight is limited). We may clip their wings to keep them from escaping their coop (but it also makes it harder for them to escape a fox). We lock them in pens to protect them (which also keeps them contained and unable to get away if a fox does get in). We give them low perches, rather than high trees, to roost in. And sometimes we leave our flocks defenseless by removing the rooster (a necessity in some areas but the rooster is the last line of defense and will protector his hens to the death).

Foxes are extremely intelligent, endlessly persistent and highly agile. I have heard of them unlatching gates, pulling out sliding trays and chewing through light-weight wire to get into a chicken coop. They can swim and scale fences 2 metres high, and if they can’t go over a fence they will very quickly dig under it.

If a fox gets into you coop at night they will often kill everything before carting off as many chickens as they can carry. Their instinct to do this is so they can return the next night and carry off some more pre-killed birds. If the chicken flock was in the wild it would have moved on to a new roosting location on the second night and so the fox will not get another opportunity and may not find the flock again.

There is so much advice on the internet on how to build a secure “Fort Knox” chicken coop. And while this is a great idea it is not what my article today is about. A fox never gives up and will try over and over to get into your coop. Night after night it will check, test, dig, chew, pull, scratch, jump… until one day they will eventually succeed.

You might look at the flimsy, sagging wire that is my chicken run and wonder how I have gone for so many years without having a fox get in to my chickens and ducks! Well it hasn’t happened even once and that is because I have used the fox’s intelligence against it. Many years ago I surrounded my chicken coop with electric poultry netting, and this alone forms the fence of my chicken run. Studies have shown that a fox needs to only get “zapped” once (and occasionally twice) to learn not to touch the fence – EVER. They will not try to jump over or to dig under. A normal chicken coop doesn’t “hurt” so the fox is quite happy to keep trying to get in, night after night. But an electric fence creates a “mental barrier” rather than a physical barrier to a fox and so isn’t so easily overcome. I don’t even have to turn my fence on any more. The fox knows not to touch it. I don’t even bother to shut my chickens in their coop at night. They are free to let themselves out into the run as soon as they get up in the morning.

I have a rooster and I refuse to clip his wings. I have found him roosting on the roof of the coop (which is a garden shed) and he flies out of the run almost every morning and greets me as I go to feed the chickens in the morning. I don’t mind because he is the protector of my girls and I want to give him the best chance possible to take on a fox should he be called upon to do so. Taking away his balance and ability to fly is a huge disadvantage.

So everything was going perfectly. Chickens and ducks were all safe and happy until about a week ago when my duck decided to go broody and is sitting on eggs in a nest she created on the OUTSIDE of my run! If anyone has Indian Runner ducks you will know that they tend to be “skittish” and to try to move her means she is sure to go off the brood and I don’t want that. I needed to protect her and needed to do so FAST. I considered trying to build a protective cage around her but this could take days to do it well – and a smart fox might still get through to my duck anyway. I needed a better way. 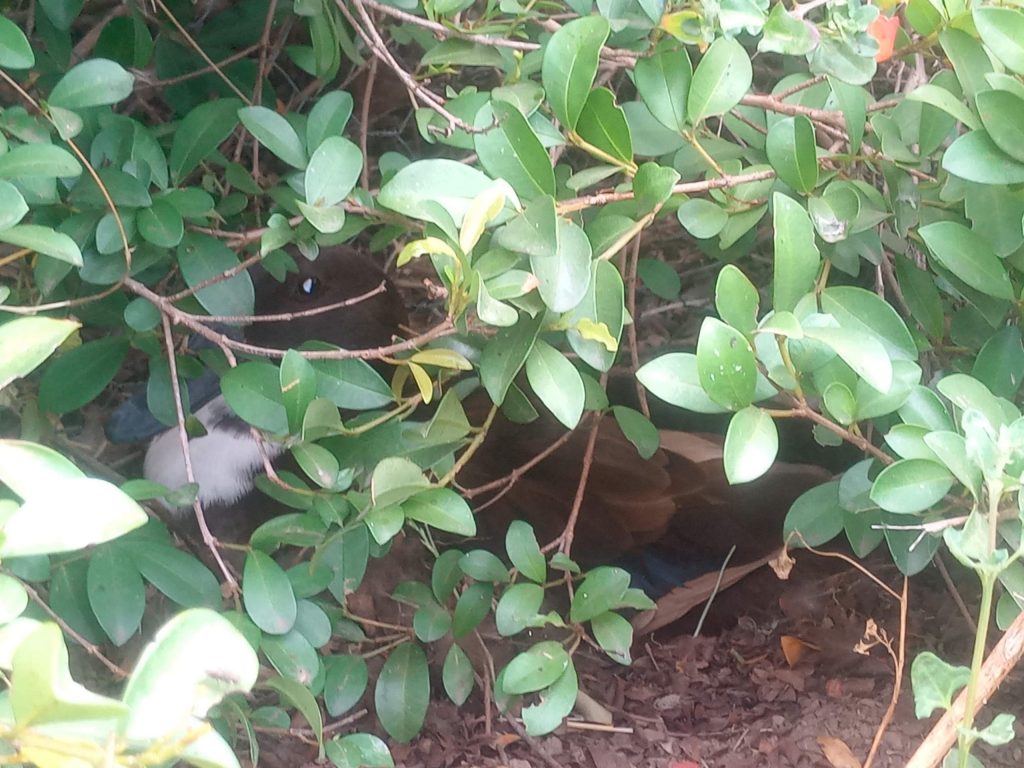 Again I chose to use the foxes own intelligence against himself. What is a fox afraid of? A man running from the house with a torch and a gun/dog/big stick.

Several people that I know have used a foxlight with great success. A foxlight is a light that comes on automatically after dark and imitates someone with a torch. The lights on it flash to give the impression of torch movement and do so at random, irregular intervals so the foxes can’t get used to the pattern. I bought a foxlight straight away and sat it on a fencepost near the chicken coop at about the height that a torch might be. It works better in an open area so foxes can see it from a distance but I have hedges all around so don’t really have much of an open area nearby. As an addition to the foxlight you can also put a battery operated radio tuned in to a talk back station to further give the impression that a person is on patrol in that area.

I will sleep easy tonight! 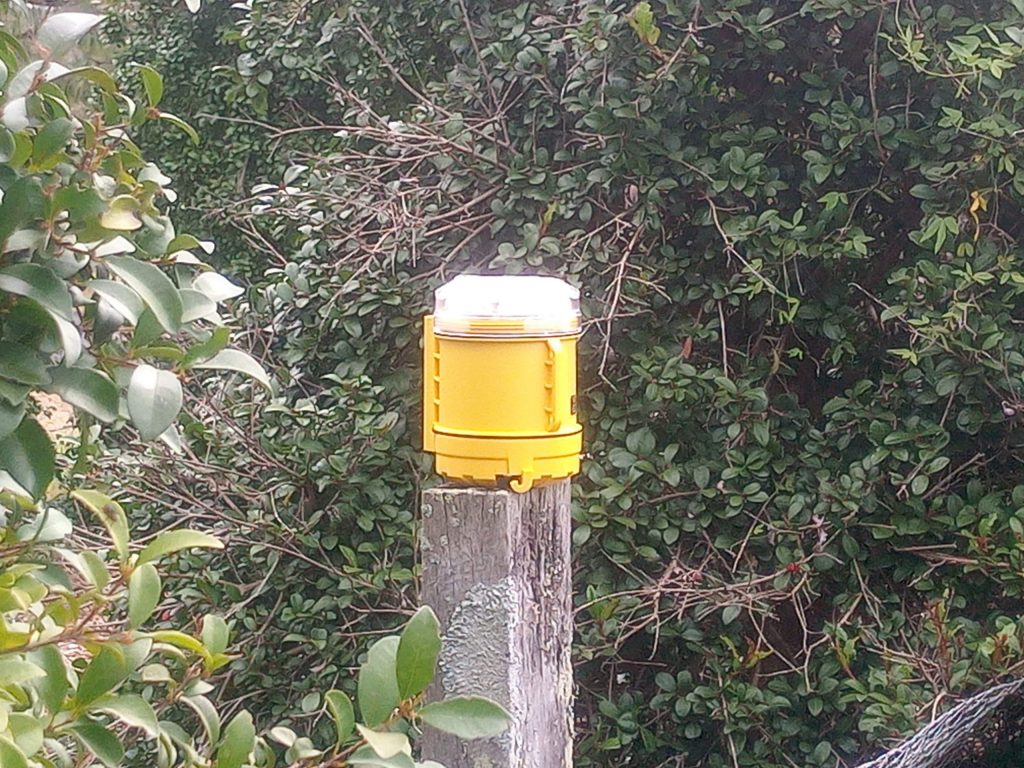