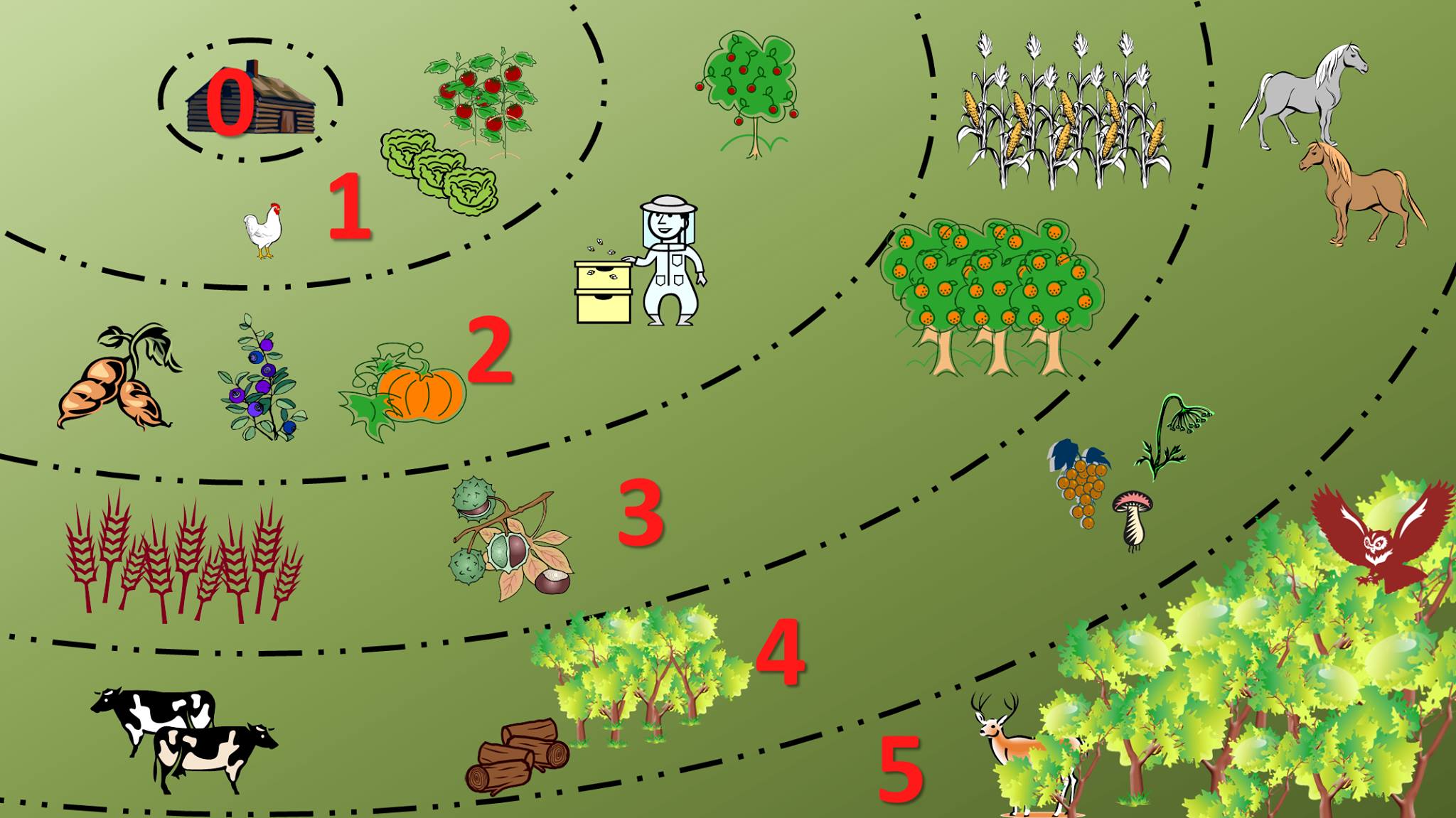 During the designing process a critical component that creates the foundation upon which the entire design is structured is what is known as the permaculture zones. The zones influence the position of each of the design elements according to the amount of attention and human activity that element requires. Following this logic, the garden elements which need the most frequent access will be placed closest to the house, and those which require visiting less often will be further away.

Now let us take a closer look at each of the individual zones.

Zone 0
Zone 0 is where the hub of human activity is centred. In most permaculture designs this would be the home however, it could also be some other central location such as sheltered work area/gazebo in a community garden, an office space, a school building, etc. The rest of the 5 zones radiate out from this point. In zone 0 we examine inputs and outputs. Focus on current waste streams and see what can be done to direct as much of it back into the site as possible while also cutting down on items that cannot be put to regenerative use.

Zone 1
Zone 1 is placed closest to the home and where the most frequent outdoor activity is. This is the most intensively used zone and the most managed and controlled. It will include accessible areas close to the house, or perhaps the walkway between the carport and the front door. The elements which require frequent attention will be placed in zone 1 such as a herb garden, vegetables which have a short growing season or require frequent picking, dwarf fruit trees, worm farms, greenhouses and sheds. A chicken coop requires daily visits and may also be placed here, or could be placed a little further out in zone 2.

Zone 2
The next zone out from zone 1 is zone 2. Zone 2 contains the elements which require less frequent attention but which you still need to visit reasonably often – though it may not need the regular daily access of zone 1 elements. In this zone you might plant perennials and annuals that have a long growing season, frequently visited fruit trees, compost bins, bee hives, ponds or a chicken coop.

Zone 3
Zone 3 is further out than zone 2 and is basically farmland. This is an area which requires minimal maintenance and care and therefore only infrequent access. Included in this zone we might find livestock, dams, crops, or orchards of larger trees such as nut and fruit trees which do not require pruning and maintenance.

Zone 4
This zone is part wild/part managed and its main use is for collecting wild foods, timber production, as a source of animal forage, and pasture for grazing animals.

Zone 5
This zone is an unmanaged wild natural ecosystem, such as bushland or similar natural area, free of human intervention, interference or control. It is useful for bringing wildlife into the garden which helps create a balanced ecosystem and natural pest control. In urban areas, zone 5 can be a nearby creek or a neglected area of vacant land. If you do not already have natural bushland nearby, it is useful to create a zone 5 in any areas of the property which are difficult to access and unlikely to be used for any other purpose in the design.

And there you have an overview of the zones used in permaculture design. Note that on smaller properties they will not usually have all 6 of these zones. Often the design will primarily consist of zones 0 and 1 with perhaps a little room for zone 2 and maybe some zone 5 slotted into some hard to access corners. If you use these guidelines to determine the locations of different elements within your own garden you will ensure less energy is expended to access them, making for a more energy efficient design. A garden designed in this manner will be more likely to be kept maintained and to become a more productive and beautiful space.