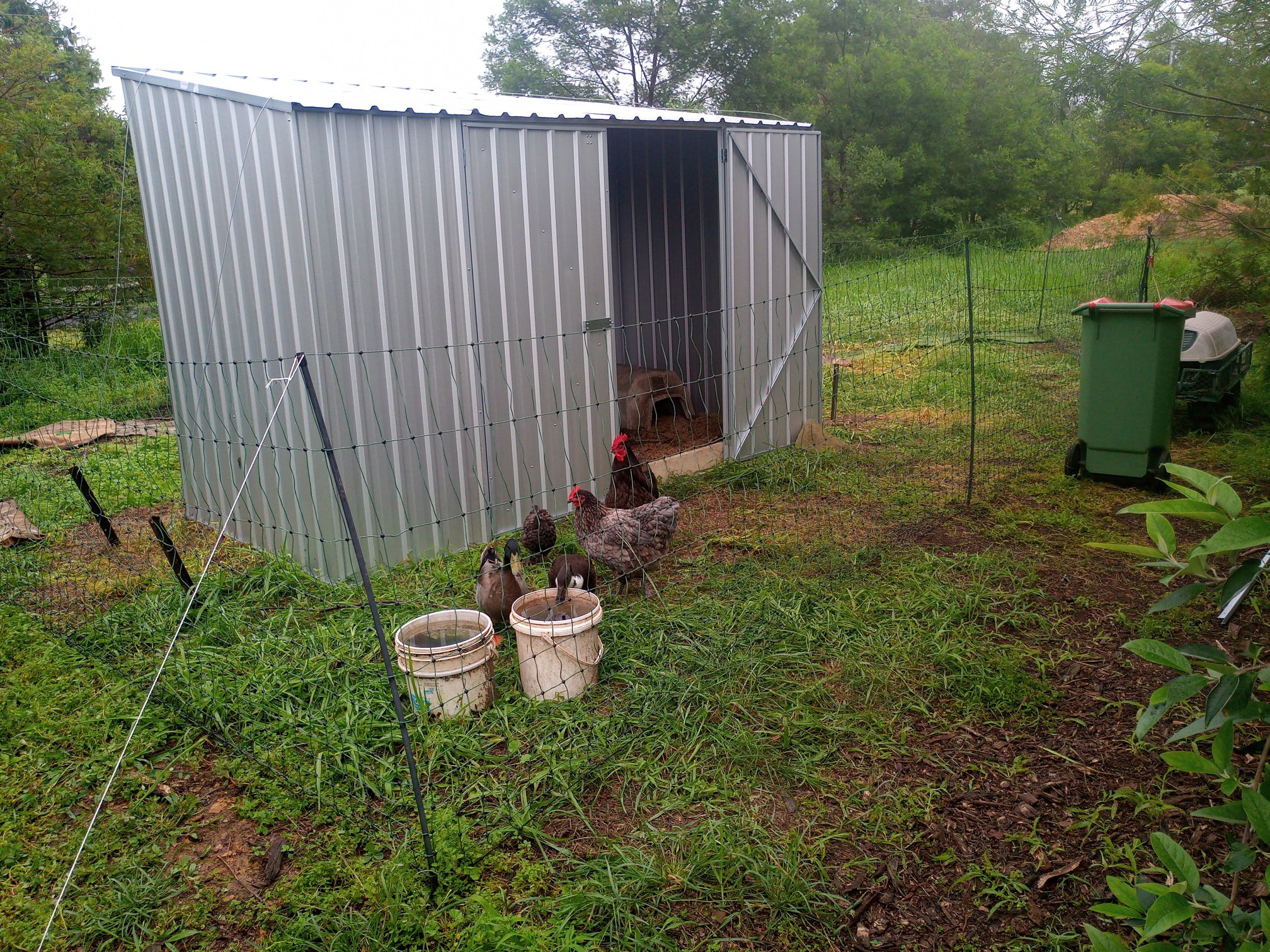 I know many of you have been affected by the severe weather we have had in NSW over the previous months. I myself have not come through unscathed. We evacuated twice due to fire, were trapped at home for 2 days due to flood, had a minor earthquake, and then, several days ago we were hit by a horrendous storm. Out of everything we have been through this is where we suffered the worst damage. Two trees came down over my main garden and food forest area (mostly over the annual beds and only taking out one fruit tree – a lemon tree) and the chicken/duck coop suffered irreparable damage. Time to build a new chicken paradise!

I wanted to move the chicken run as it was poorly located. I had put it on the downhill side of the food forest but really wanted it on the uphill side so the nutrient rich runoff would passively fertilize my plants and fruit trees rather than being lost down the paddock. I had no time to build something fancy so it was a case of rushing out to buy a tin shed that I could throw up in a day or two. I needed something fast as I was afraid my old coop would collapse onto my chooks and ducks, plus they weren’t very well protected from the weather any more.

I bought a 3m x 1.5m shed and got it up in a day and a half. I left the channel off the lower edge of the roof as I intend to split some PVC or irrigation pipe and slip this over the edge of the tin to use like a gutter. I want to collect the water off the roof to fill the chickens’ waterer.

Inside the shed I am using the deep litter method. This is when you put down a very thick layer of high carbon material for the bedding and let the microbes in the system break it down into compost while the chickens add the nitrogen component (manure) and turn the “pile”. You keep adding more and more bedding on top as needed and remove your ready-made compost once or twice a year. For the bedding I used fresh wood-chip. I also mixed in some coffee chaff. This is a waste product from the coffee roasting industry and I have found that it seems to keep the mites and lice away. My chickens and ducks have never had these parasites and I think the coffee chaff I use is the reason why. I do, however, have concerns as to how it might affect the ecosystem that I want to get going using the deep litter method. If it repels mites and lice will it cause an issue for the good bacteria that will be at work breaking down the chicken waste and keeping the system alive and healthy? Time will tell. I also have a weed known as “Fleabane” on my property which repels mites and lice and I threw that into my coop as well – but I am thinking I might put this out into the run area instead as I don’t want this effecting my system either.

Over the top of the coop I plan to put wire mesh and grow a deciduous vine enclosing the entire shed to provide shade in summer and insulation for the chickens and ducks.

For a nesting box I like to have an open bottom. This way I never have to actually clean out and put fresh bedding into the nesting boxes as the bedding in there is just the same bedding as for the rest of the coop. I use the roof half off a plastic dog kennel that we found discarded on the side of the road.

Until I get the guttering and waterer set up I am just using buckets for water. Ducks muddy up their drinking water very quickly and if I use a nice deep bucket then the mud and mess that the ducks put into the water will settle to the bottom and the water on the top stays a bit cleaner. Also, the ducks can’t reach the bottom of the buckets so they do not stir up the muck that collects down there. Note that the water still needs changing very regularly with ducks – they are messy things.

What about foxes? Yes, we have plenty around here but I cannot say enough good things about my electric poultry fencing. I have never had to lock my chickens into the coop at night because the foxes never dare to try to breach my electric fencing – they only get zapped once to know that it hurts. Don’t get me wrong, I have lost chickens and ducks when the fox came in the day time while my poultry free range and when some silly ducks refused to go into the enclosure at night (I couldn’t get them off the dam), but the only predator that has ever got past the electric fence was an eagle that was taking my young chicks. With the electric netting you do need to be careful not to let the grass grow up around the fence and short it out. To prevent this I place fake turf and hessian bags under the fence line. Use whatever you have on hand for this; lino, carpet, plastic, wooden planks (as long as they aren’t too thick), etc.

My battery and solar panel for the chicken fence are on a gardening trolley. This makes it very easy to move around (not that I do move it – but the battery is very heavy). In a small wheelie bin beside the run I keep my chicken food.

Today I moved in my 2 Indian Runner ducks and 3 Australorp chickens and for ages I just stood there in the rain and watched them as they made happy chicken (and happy duck) sounds. And despite my crushed garden beds and toppled lemon tree – I couldn’t help but smile…

Hatching chickens – No incubator? No problem!