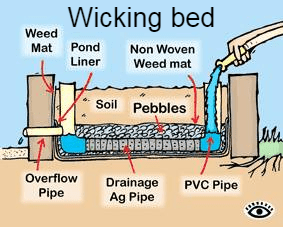 As explosive thunderstorms and torrential rain passed over us last Thursday night I was rejoicing. Our property exists exclusively on rain water and our water tanks were desperately low. That was when I got my inspiration for today’s Permaculture Champions post. And now that my modem (which was blown up during those thunderstorms) has been fixed I can share with you a few passive (and almost passive) irrigation techniques. And remember – you don’t need to be on tank water to appreciate the value of saving water.

SWALES
Swales are what I use on my property and are great for larger areas but can also be used on smaller blocks. Swales are long channels in the ground that run perfectly on contour. Rain flowing down the side of a hill or slope catches in the swale and is held there while it slowly soaks into the soil. This water is then retained in your soil rather than lost off your property as runoff. Swales can be very large – 100’s of meters long and a couple of meters deep is not uncommon on large properties – but smaller versions can work equally if you don’t live on acreage.

Swales should not run downslope as this will just create a channelling of the water somewhere further downhill. This is NOT a swale – it is a drain.

The topsoil which has been removed from the excavated swale is placed on the downslope side of the swale and is planted into. This is called the “berm” and water is provided to the plants on the berm by water held in the swale.

FISH SCALE SWALES
This is a modification on the swale and would be used when one long swale is not needed or not appropriate. A fish scale swale might be a better choice for smaller front and back yards. They are made by digging several small curved swales and designed so that each swale overflows to the next swale lower downslope. As with standard swales, the soil from the excavation is placed downslope and is planted into.

BURIED WATER RESERVOIRS
There are many different varieties of buried water reservoirs. Basically we are talking about any water holding reservoir that is buried beside your plants and designed to slowly leak water deep in the soil where it is readily accessible to the plant roots. This is great for reducing water loss from surface evaporation and ensuring your plants develop a deep root system. Watering plants on the surface can encourage shallow roots if there has not been enough water applied to soak deeply into the soil.

The list of ideas for buried water reservoirs is endless. Anything that can hold the bulk of the water while leaking it out slowly can be used. Try burying milk cartons or buckets with holes drilled in them, unglazed terracotta pots, or ag pipe. PVC pipes can be either buried vertically or horizontally. PVC pipe buried vertically beside fruit trees is commonly known as “deep pipe irrigation” and can be filled with gravel to stop the pipe collapsing as the tree grows.

HUGELKULTURE
A hügelkultur garden bed is a raised bed of about 1m high made with a core of logs and branches. Large logs are placed at the bottom of the mound and branches, sticks and leaves fill the voids. Organic material is piled on top, leaves, twigs, manure, grass clippings, etc. Then good quality soil is put on top ready for planting.

The process helps to improve soil fertility, water retention, and soil warming, thus benefiting plants grown on or near such mounds. As the wood decays, its porosity increases allowing it to store water like a sponge. The water is then slowly released back into the nearby soil.

WICKING BEDS
Wicking beds water plants from below rather than above. They are garden beds which have a water reservoir at the base – like a huge self-watering pot. The water reservoir is often filled with gravel or something similar and then the soil is placed on top of the gravel. Water is drawn up through the soil via a process called capillary action or wicking. This allows moisture to be more evenly distributed through the soil, creating better growing conditions for the plants and passive watering.

And that is where I will end my list. I hope my passive watering techniques have given you a thirst to learn more.

Oh! And one last thing – don’t forget to MULCH, MULCH, MULCH. Keeping in mind that this does not only mean laying straw or woodchip on your bare soil, living mulches include plants such as ground cover plants which can do the same job and look pretty as well.